It’s stuck in your head.

“The Girl from Ipanema”, or at least the theme is. Rattling around on your cranium for the rest of the day, or longer. Even if you don’t know that particular song, there are a schwack of songs, themes, or even lyrics that have the ability to stick. Why does this happen? I could rattle off some scientific mumbo-jumbo that would sound cool, and impressive. Fact is. It’s simple. No really…”simple”. For the most part the mind does not like complicated, especially in advertising, especially now. Consumers are bombarded with thousands of messages, both traditional and online. Creatives must focus even more on who the consumer is, and convince them to act with witty, clever creative, that stands out from the rest of the “spam-vertising”.

(ok, I just spilled soya sauce on my napkin, the one I am using to write this. See the picture below. I am kicking it old school. No tablet or laptop, not even a pad of paper. I am scrawling my thoughts down, with a borrowed pen, on a napkin in a sushi restaurant. Hey, sometimes I can’t control the creative, when this baby is ready to come out, stand back!) 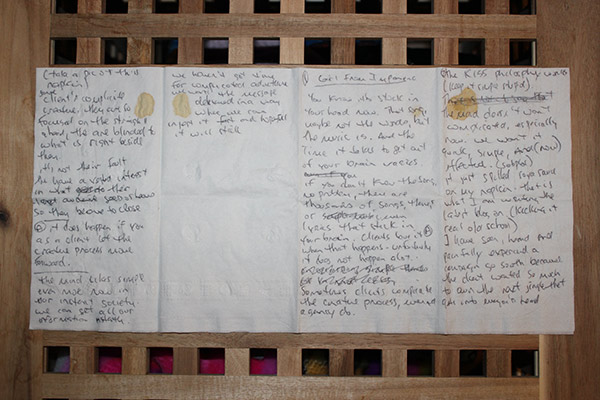 That is why it is important for Creatives to focus on the audience, and of course that starts with the client. Pulling out pertinent info, drilling down to the specific details about the audience. It can almost be a therapeutic exercise for the client to answer the hard questions about his brand, and his true audience.

Simple works. And it works even better when you have all the elements needed to execute great creative. Follow the K-I-S-S Philosophy (keep it simple stupid)